Where to find us

Upon arrival at the LA PALMA airport, you have to go to the elevator next to the escalators and come down to the BASEMENT no. 2. On the left, you will find our MEETING POINT (A). We will be waiting for you to deliver the vehicle. 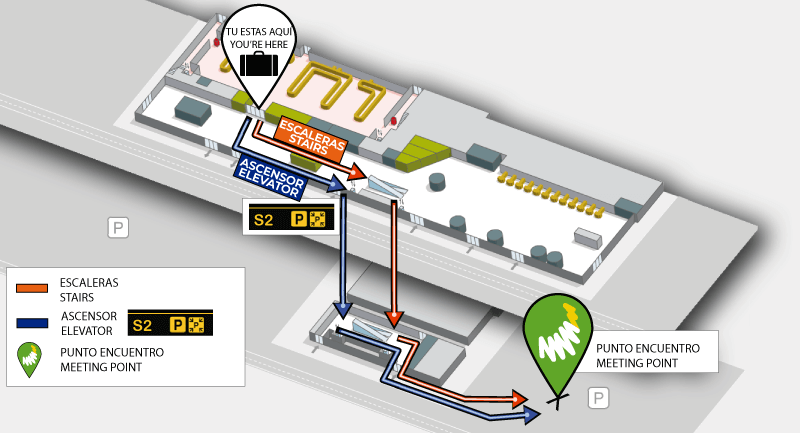 Thinking about "The Canary Islands", automatically takes you to your dream vacation, full of sun and relax. Here you can find more than that. La Palma is an astonishing island, full of impressive landscapes, which will bring joy to any nature lover. This is the main reason why La Palma is rightfully called ‘La Isla Bonita’ (The Pretty Island).

About 2 million years ago, this island emerged from an underwater volcano, becoming one of the younger islands of the archipelago, characterized by a very quick volcanic growth.

With an area of 706 km2, La Palma has a population of 86,000 inhabitants living in its 14 municipalities. This island is one of most wooded of the Canaries, with forests mainly composed by pines and laurels. The North part is dominated by La Caldera de Taburiente, National Park since 1954, which is the largest world’s emerged crater.

The island is divided into two climates zones by the range of volcanoes Cumbre Vieja, composed by the volcanoes San Antonio, Volcán de San Juan and Teneguía, which was the latest erupted volcano in the Canary Islands (1971). On the island, you can also find the Natural Park of Cumbre Vieja and the Natural Park of Las Nieves, as well as other small protected areas around La Palma. The Volcano Route, which crosses the southern half of the island through the extinct volcanoes mountain range, is surrounded by spectacular volcanic landscapes and is one of the most attractive paths of La Palma.

The special characteristics of La Palma has made it not only a paradise for hikers, but also a special place to practice many other sports such as climbing, diving and mountain biking. Relaxing by the sea is also an option, as this island offers black sand and rocky beaches, natural swimming pools and other natural areas as, for example, El Charco Azul.