How to reach the Check Point

Please bear in mind that TopCar does not have an office in the main arrival’s hall. You can find our partners in the same airport at the CHECKPOINT located in the S2 (Second Basement) of the parking place. We would be happy to assist your calls directed to: (+34) 647 862 005.

If you still haven’t filled in the “flight number” field in the booking form of our website, we kindly ask that you send it to us via E-mail to tenerifenorte@topcar.es or SMS/WhatsApp to (+34) 647 862 005, together with your booking reference number. 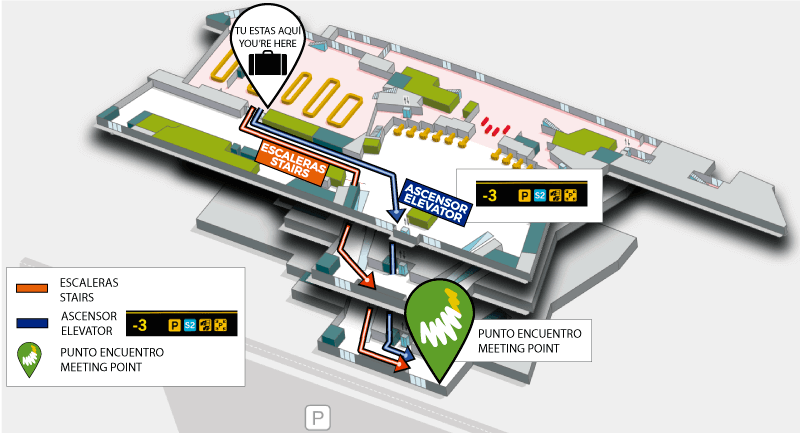 or similar (GROUP A)

or similar (GROUP B)

or similar (GROUP B1)

Our car hire company in the north of Tenerife has an office close to Los Rodeos Airport. The airport is located approximately 7 miles away from the capital, Santa Cruz de Tenerife, in the municipality of San Cristóbal de la Laguna, and is accessed via the TF-5 motorway. Vehicles are collected from the basement of Tenerife North Airport.

Tenerife is the largest island of the Canary Islands and is located on the centre of the archipelago, between Gran Canaria, La Gomera and La Palma. It has an area of 2,034 km² (1,267 square mile) and a population of nearly 900,000 inhabitants. Tenerife has a peculiar triangular shape, crowned by the highest mountain in Spain, the gigantic Mount Teide, with 3,718 meters. The weather on the island is usually warm, meaning you can enjoy the sun and the sand, even during the winter months, while watching the snowy silhouette of the Teide peak.

Its abrupt terrains and the different climates of this island conforms a wide range of landscapes and ecosystems with their own flora and fauna. Among the main attractions of Tenerife, you can find 43 protected natural areas, being some of the most important: the Teide National Park (created in 1954 and declared a Natural Heritage Site by UNESCO in 2007), surrounded by La Corona Forestal Natural Park, and the Rural Parks of Anaga and Teno. Another essential place to visit on the island is La Cueva de los Vientos in Icod de los Vinos, one of the longest volcanic tunnels in the world, almost 18 kilometres (11 miles) of underground galleries, which makes it a unique natural attraction in Tenerife.

The 31 municipalities of Tenerife have different atmospheres, finding more traditional areas on the north and other more cosmopolitan on the south, with modern infrastructures and a wide range of leisure activities to enjoy the holidays.

The capital, Santa Cruz de Tenerife, with 58 km (36 miles) of coastline, has the Plaza de España as its nerve centre. Here you can visit the Baroque-style church "Iglesia de la Concepción", the Regional Military Museum of the Canary Islands, the Auditorium, the Guimerá Theatre or the García Sanabria Park. If you prefer a day on the beach, a few miles away from the capital you can find the Playa de las Teresitas. If you are looking for a more cultural journey, you must visit La Laguna, the second largest city of the island. There, you can see the Cathedral of "Nuestra Señora de los Remedios", the Santa Catalina de Siena Monastery or the Palace of Nava, declared of Cultural Interest. Also, you can enjoy the spectacular views of the landscapes of the Anaga mountains. The coastal town of Candelaria is also worth visiting, only around 9 miles from the capital, where the neoclassical Basilica of Nuestra Señora de Candelaria is located.

Areas for car hire in Tenerife