The round island. The miniature continent. Gran Canaria is known to the general public thanks to its incredible landscapes, both in the mountains and on the coast. However, only a privileged few know the best calas of Gran Canaria.

Read on because in this article, with your TopCar hire car, we will take you to the best calas in Gran Canaria. Yes, those hidden coves on the island that only the locals know about. Spend a spectacular day discovering the most hidden places in Gran Canaria.

The Hidden Coves in Gran Canaria that you can't miss

Tamarán, as the ancient aborigines called the island of Gran Canaria, is famous worldwide for having some of the best beaches in Spain in a territory that covers a little more than 1,560 km² (602 square miles).

We're sure you've already heard about Maspalomas beach, with its endless golden dunes, as well as the enchanting beach of Mogán, located in "Little Venice" of the Canaries. And, of course, the beach of Agaete and its unmistakable fishing atmosphere, or the urban beach of Las Canteras. All of them are incredible and dazzling.

However, despite being one of the tourist destinations of choice for many Spanish and European visitors (more than three million visitors come to Gran Canaria every year in search of its eternal spring), its coastline has some real hidden gems. Discover the five best coves in Gran Canaria below.

The first of our picks is a cove in the south of Gran Canaria, Tiritaña bay, located in the southern municipality of Mogán, more specifically between the towns of Taurito and Playa del Cura. It is 77 km (48 miles)  from the island's capital (Las Palmas de Gran Canaria) and 52 km (32 miles) from Gran Canaria Airport (LPA).

You can reach it via the GC-1 motorway, in the direction of Mogán and take exit 67 towards Taurito. You will find three consecutive roundabouts, where you’ll need to follow the signs to ‘Playa del Cura’ via the GC-500.

In a few minutes you will see a brown sign indicating that you are in the Tiritaña ravine. There is a small parking area, so please don't park at the bus stop (or guagua, as the Canarians say).

Now you only have to descend on foot for about ten minutes, always on the left side of the road, to reach the Tiritaña bay, where you will enjoy a corner of crystal-clear waters totally untouched by mass tourism. 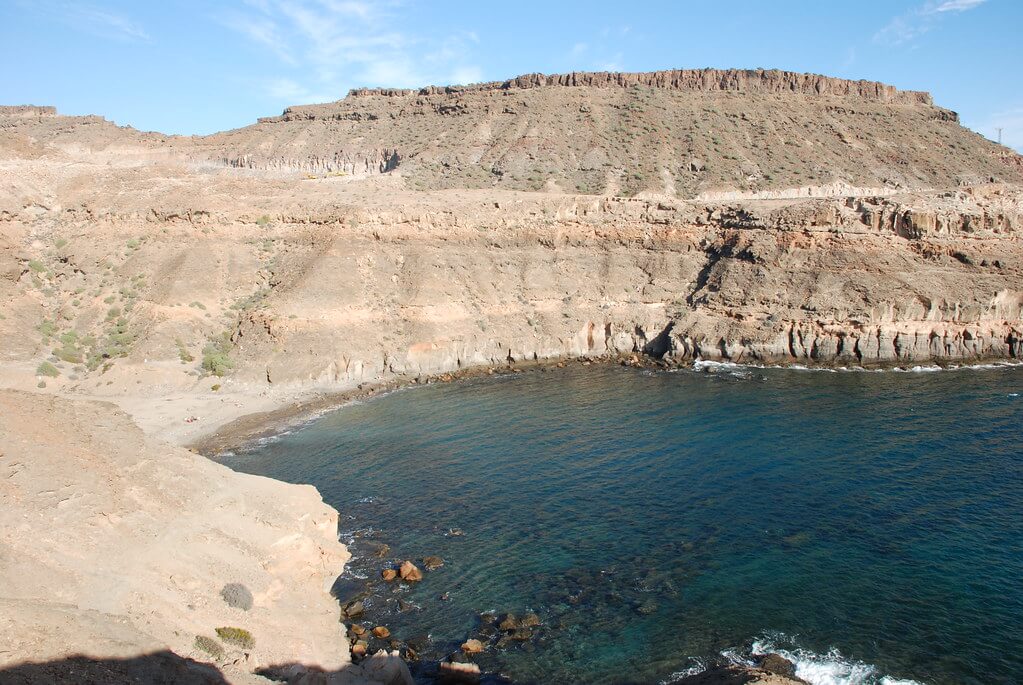 The second of our coves in Gran Canaria is called Medio Almud, which is located next to the previous one, so to get there you will have to follow the same route. The only difference is that you will have to continue driving after leaving the Tiritaña ravine behind and going through a small tunnel.

After a short while you will come to the Medio Almud ravine, so you only have to take the exit on the right and follow the road to the end, where you’ll be able to park without any problems.

Here you will enjoy a small cove of sand and stones with crystal clear waters and guaranteed sunny weather all-year-round. 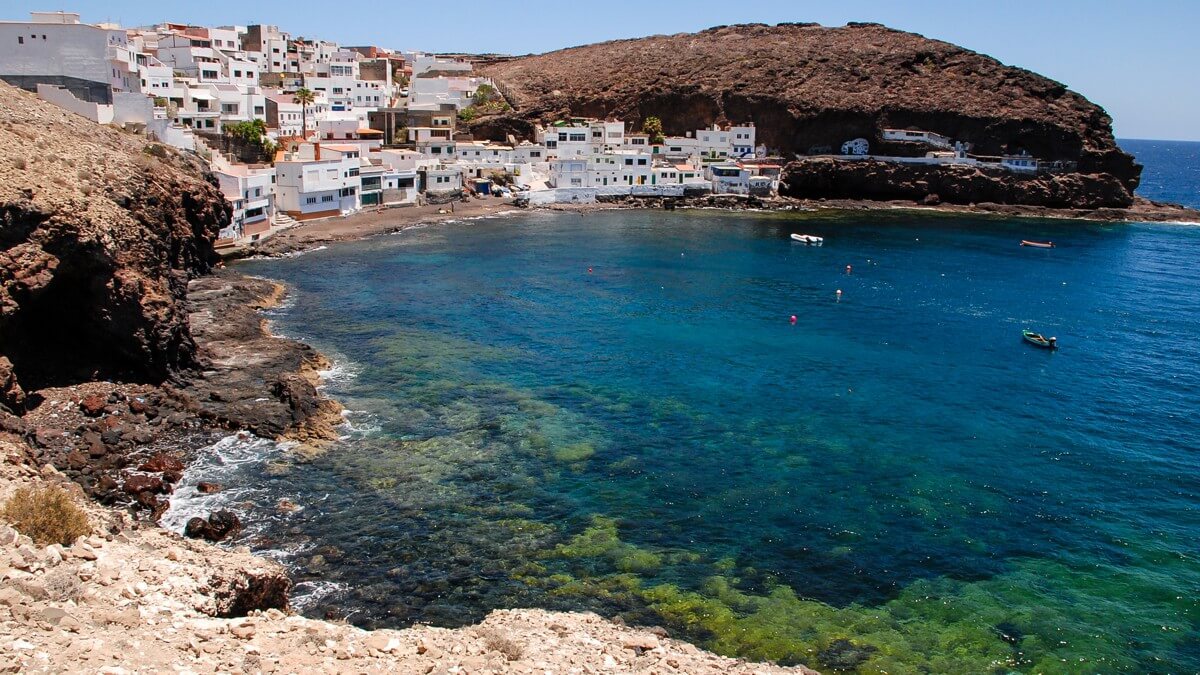 The municipality of Telde is home to one of the best coves on the island, the Tufia cove, just 5 km (3 miles) from Gran Canaria Airport and about 25 km (15.5 miles) from Las Palmas de Gran Canaria.

If you are coming from the north, on the other hand, things get a little more complicated. Having taken the aforementioned exit 13, you have to go around the petrol station, leave it behind and reach a roundabout where you have to make a 180º turn that will take you under the motorway itself to another roundabout, where the road to Tufia is signposted.

In a few minutes you will find Tufia, where you can park your car in the areas provided. A short walk will take you to a magical place.

The picturesque little village of Tufia, with its white and blue houses next to the seashore (something quite rare nowadays) and its cave-houses, is located next to an archaeological site of the ancient aborigines of the area.

Its small cove with crystal-clear waters, black volcanic sand and cliffs on both sides is a real attraction for diving enthusiasts. Here you will feel the experience of the simple life, in a place with nothing to disturb the tranquillity, which will give you a unique sensation of freedom. Sounds magical, right?

Another of Gran Canaria's hidden coves that you just can't miss is located right next to the previous one. So, to get there you'll have to follow the same directions as above, with the only difference being that, once you leave the car, you will have to head north on foot, in the opposite direction to Tufia.

The contrast with the previous one is remarkable, as the Aguadulce bay is formed of golden sand, something totally unusual in this part of the island, as the beaches here are typically of black sand.

In Aguadulce you can enjoy a small cove with crystal clear waters. You will have to be especially careful with the wind, but otherwise, this is an idyllic quiet spot in the east of the island.

We now move to the north of the island, where the historic municipality of Gáldar is located. To reach our last option, the small cove of Martorell (located 30 km / 18.6 miles from Las Palmas de Gran Canaria and 53 km / 33 miles from Gran Canaria Airport), follow the GC-2 motorway and take exit 25 towards ‘Sardina del Norte’.

Leave the roundabout behind you and continue for quite a while until you reach the village of Sardina del Norte, after which you will have to go over two more roundabouts, before reaching a parking area.

Once there, turn left after the pedestrian crossing and continue straight on until you go down a slope. Leave the car parked in the lot on the left and continue on foot for a few minutes to reach one of the best coves in Gran Canaria.

This is a fairly quiet place, as this cove made up of pebbles is well sheltered from the currents and winds. It is also an ideal place for scuba diving due to its rich seabed.

Of course, it never hurts to remember that, in order to preserve these beautiful natural spots and so that we can all enjoy them in the same way, it is essential to bear in mind several things:

In short, the coves in Gran Canaria are synonymous with "latitude of life", as one of the best-known slogans of the Canary Islands says.

This is the secret we wanted to share with you. Now you can enjoy some of the least visited places on our island as if you were a local - shhh, don't tell anyone!